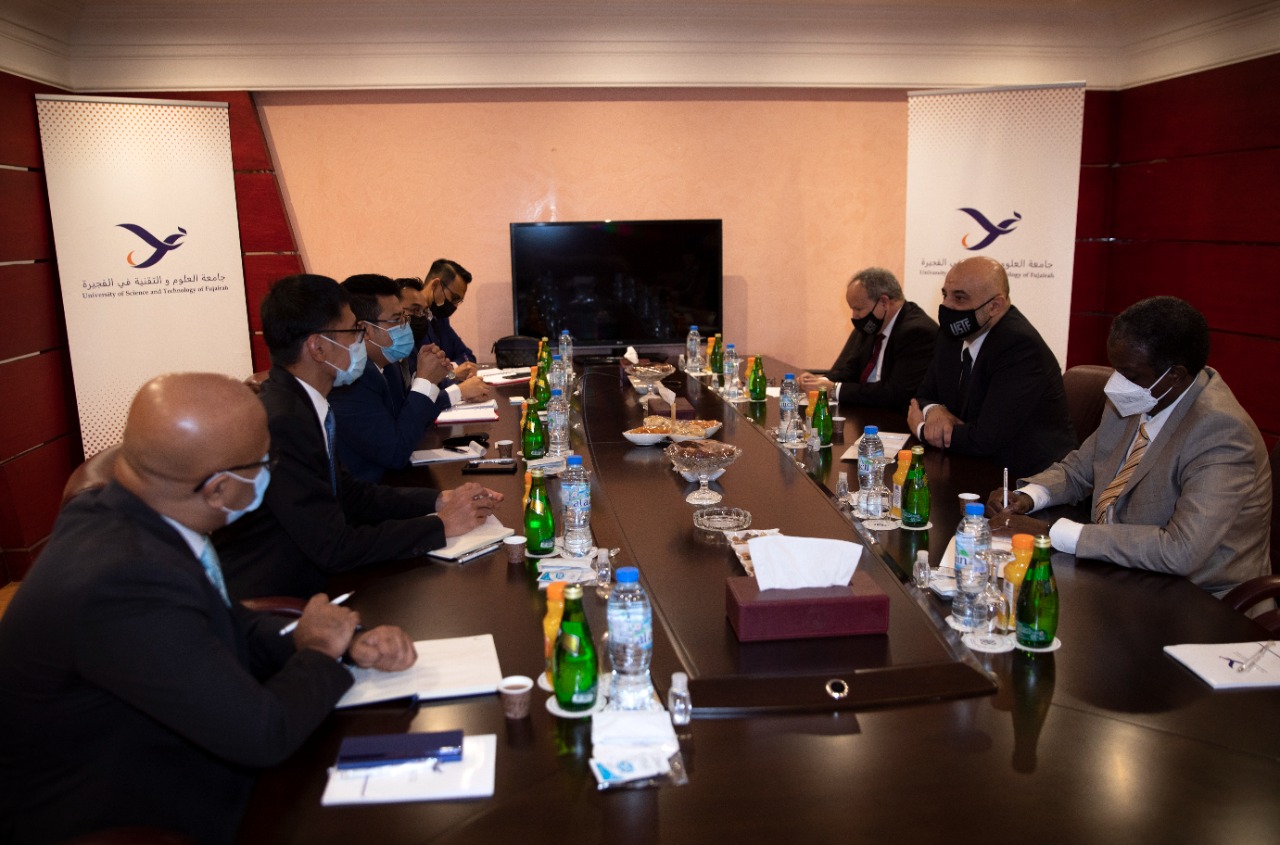 A delegation from the Malaysian Consulate General in Dubai visited the University of Science and Technology of Fujairah (USTF). Professor Ali Abuoelnour USTF Chancellor, Professor Zein Elabidin Rizk, Vice Chancellor for Academic Affairs, and Dr Ahmed Zain Eladin, Vice Chancellor for Financial and Administrative Affairs, received the delegation. The visiting delegation was headed by Mr MOHD HASRIL ABDUL HAMID, Consul General of the Malaysian Consulate General in Dubai, accompanied by MR. AHMAD DARUL AKMAL BIN MOHAMED ALI, Vice Consul (Education) and MR. MOHD ZAHIRUL NAQI SHOAIB, Consul (Agriculture)and Mr. AHMAD ZAKI BIN OSMAN, Vice Consul (Agriculture) and Mr. MOHAMED AZAR, Manager, Education.
Prof. Ali Abu Al-Nour gave a presentation to the visiting delegation about the university and its various specializations and colleges. He reviewed the diversity of students and faculty members and the university's achievements in the short period recently. Thanks to the support and patronage of HH Sheikh Mohammed bin Hamad bin Mohammed Al Sharqi, Crown Prince of Fujairah, and Chairman of the USTF Board of Trustees.
During the meeting, the university Chancellor reviewed the stages of the university's development and the graduation of the first class of the university (Year of The Fiftieth Class).
The USTF Chancellor also presented an overview of the university's strategy in the coming years, which was based on five strategic goals represented in promoting the excellence of education, performing high quality, applicable and impactful research, recruiting qualified diverse students, building reciprocal relationships and long-lasting ties with external communities, and achieving operational excellence in University services.
HE discussed the cooperation with the Malaysian Consulate General in Dubai during the visit and collaboration with universities and educational institutions in Malaysia. The two sides discussed many areas of partnership and topics related to international cooperation and cultural exchange between the USTF and educational institutions in Malaysia, especially in technology and sustainability.
The Chancellor indicated that the areas of cooperation between the two sides could include:
The establishment of joint academic degrees with top Malaysian universities. The exchange of faculty members and students. Participation in various student conferences. In addition to the establishment of a UAE-Malaysian (EIN) Education and Industrial Network, the establishment of a UAE-Malaysian (RIC) Research and Innovation Center in USTF, and the establishment of a UAE-Malaysian (EDBC) Educational Data Base Center, and signed memoranda of understanding between USTF and top Malaysian Universities and cooperation in the fields of research and projects of common interest.
The Malaysian Consul General expressed his thanks and appreciation to the USTF Chancellor for receiving him and the valuable USTF academic and scientific information. He is proud of what he heard from a detailed explanation about the scientific and educational process of this pioneering scientific and prestigious academic university in the Emirate of Fujairah.
At the end of the visit, the Malaysian Consul General and his accompanying delegation visited the university building and its various colleges. Expressing his appreciation for the efforts of the University of Science and Technology of Fujairah and the advancement of its scientific leadership and comprehensive services it provides to students.
At the end of the meeting, HEthe USTF Chancellor presented the University's Trophy as a memento to the Consul General of the State of Malaysia and the accompanying delegation in appreciation of his attendance and communication with the University.